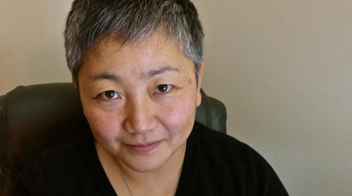 Hiromi’s first novel, Chorus of Mushrooms (1994), received the Commonwealth Writers’ Prize for Best First Book in the Caribbean and Canada region and was co-winner of the Canada-Japan Book Award. Her short stories and poetry have been widely published in literary journals and anthologies. Her second novel, The Kappa Child (2001), was a finalist for the Commonwealth Writers’ Prize for Best Regional Book, and was awarded the James Tiptree Jr. Memorial Award. Her first children’s novel, The Water of Possibility, was also published that year. Hopeful Monsters, a collection of short stories, was released in 2004. Her YA/Crossover novel, Half World (2009), was long-listed for the IMPAC Dublin Literary Award and received the 2010 Sunburst Award and the Carl Brandon Society Parallax Award. Her long poem, co-written with David Bateman, came out in Fall 2009. Wait Until Late Afternoon is her first book-length poetry publication. Darkest Light, companion book to Half World, is her latest novel. It is the first book released under the new Razorbill Imprint of Penguin Canada. She was 2014 Guest of Honour, with N.K. Jemisin, at WisCon38.

Hiromi is an active member of the literary community, a writing instructor, editor and the mother of two (big) children. She has served in numerous writer-in-residencies and is currently in BC, working on an adult novel and a graphic novel.