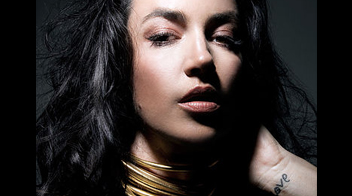 Kinnie Starr is a genre-defying artist blazing her own influential trail. Entirely self-trained, Starr moves from hip hop to art-pop, folk to spoken word to EDM with eclectic grace. Her music is fearless, intuitive, politically charged and melodic, challenging listeners while making them bounce and nod. In 2000, after leaving Mercury/Island/DefJam, she was one of the first beatmakers to mix pow wow and hip-hop/EDM. on her trilingual underground classic Red % X which featured Ulali. Starr produces her own music, making her one of the 5% of female producers worldwide – a growing populus she spearheads by example. She investigates the complex conversation around the gender gap in music production and authorship with her 2016 feature length documentary, Play Your Gender, directed by Stephanie Clattenburg in collaboration with Starr, produced by Sahar Yousefi, and co-written by all three women

Starr’s career has taken her around the world — across Canada, the U.S., Europe and Asia, but she is first and foremost an artist and activist. Her activism began before her career in music as a visual artist, and her current visual work continues to touch on her areas of interest: race, home, family and humanity. Starr was featured in 2013 at Vancouver’s Bill Reid Gallery as part of “Rezerect”, a six-month showing of modern indigenous erotic art. In 2014, Starr showcased indigenous law and water activist Caleb Behn in her video Dream Bigger – an anthem of sorts that we can all do better. She also collaborated with Haida Raid in 2015 to make a humorous yet powerful animated video about the urgent need to protect our water, which won Best Music Video at Toronto’s prestigious ImagineNative festival.

Kinnie Starr is a published author and illustrator (How I Learned to Run, 2008, House Of Parlance). She has worked in youth arts activism and mentorship since 2006 as a founding staff member for Amp Camp through the Manitoba Audio Recording Industry Association (MARIA), and a part-time presenter for Canadian School Presenters Online and Artstarts In Schools. Starr teaches a playful self-esteem boosting “Auntie Kinnie’s Rap Skool”; a literacy-focused, rhythm-based, and uplifting hip hop program aimed at helping LGBT and First Nations youth – and ALL kids – find their voice and power.

Calgary-born of French, German, Irish and Mohawk bloodlines, the trilingual (English, French and Spanish) Starr has a BA in Race and Gender Studies from Queen’s University, Ontario. Raised in Calgary and university educated in Ontario, she now calls Sechelt, BC home and shares her life with partner, Gwaai Edenshaw, a renowned carver and the son of Guujaaw.