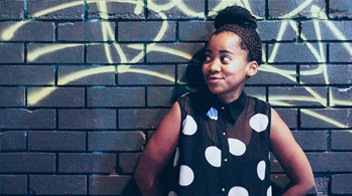 Maneo Refiloe Mohale is a queer, Black feminist writer, performer and community organiser born, raised and based in Johannesburg, South Africa. Her work has appeared in various print and online publications, including Jalada, HOLAA!, The Beautiful Project, From the Root Zine, The Mail & Guardian, and Expound Magazine. She is the 2016 Bitch Media Global Feminism Writing Fellow and writes on various topics, including race, media, queerness, survivorship, language, history and silliness.

She recently received her Bachelor of Arts (Honours) degree in History and International Relations from the University of British Columbia (UBC) located on the unceded, occupied and ancestral territory of the xʷməθkʷəy̓əm (Musqueam) people.

While at UBC, she was involved in various organisations, movements and student groups. She was a member of the founding Editorial Collective of The Talon – an online student journalism platform that continues to centre the voices of marginalised students on campus.

She was Local Advocacy Director of AfricaCanada.org – a group that sought to promote ethical human rights advocacy in cheeky and innovative ways, such as their flagship workshop entitled “So You Want to ‘Save’ Africa?”. She was briefly a member of the Purple Thistle collective, and met many gorgeously inspiring folks at the youth-run community centre before it closed its doors in 2015.

She was also in a band, alongside three incredible women of colour, and was thrilled to perform with them in various venues all over the city.

When she’s not writing, she’s either baking or hanging out with her amazing family in South Africa.

The Scrutiny of Now