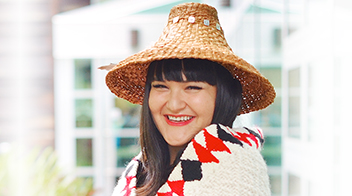 Salia Joseph is from the Sḵwx̱wú7mesh and Snuneymuxw First Nation’s on her father’s side and is British and Jewish on her mothers. Her parents are Chief Floyd Joseph, and Eve Joseph. Her grandparents are the late Chief Larry Joseph from the Sḵwx̱wú7mes village of Stawamus, and Rose Thomas from Snuneymux. In 2016 she graduated with a bachelor of arts degree in First Nations and Indigenous studies from the University of British Columbia. During her time in the program she primarily focused on the work and resistance of Indigenous women through art, Indigenous feminisms and new media.

Upon graduating Salia spent time working for the BC Arts Council doing capacity building for Indigenous arts funding on a provincial level. She also worked for her community in the Culture and Education department doing culture camps with youths and adults.

Currently Salia is doing the First Nation Language Proficiency Certificate Program at Simon Fraser University, which is a full time immersion program into her language, Sḵwx̱wú7mesh Sníchim. While enrolled in this program she also works for Kwi Awt Stelmexw as their Events and Community Relations Coordinator. Salia is passionate about where she comes from as a Sḵwx̱wú7mesh woman and is dedicated to always learning more about her culture, and has been particularly dedicated to wool/cedar weaving and language as of late.