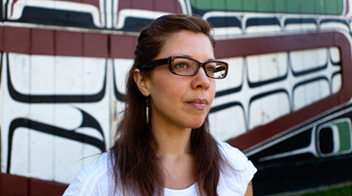 Sarah Hunt is a writer, activist and educator who is passionate about working collaboratively to address issues related to justice, decolonization, gender and sexuality. Sarah’s writing has been published in numerous scholarly books and journals, as well as on blogs such as decolonization.org and mediaINIDIGENA.com, and her Op Eds featured in such media as the Globe and Mail and CBC Aboriginal.

In 2014, Sarah was awarded a Governor General’s Gold Medal for her doctoral research which investigated the relationship between law and violence in ongoing neocolonial relations in BC, asking how violence gains visibility through Indigenous and Canadian socio-legal discourse and action. Sarah’s academic research builds on her 15 years of work as a community-based researcher & educator in both rural and urban Indigenous communities, with a particular focus on issues facing girls, women and Two-Spirit people.

At its heart, Sarah’s work is concerned with countering various forms of colonial violence with radical accountability, responsibility and relationality. Whether in the classroom or around the kitchen table, she aims to foster the revitalization of Indigenous knowledge within our everyday actions, relationships and ways of being. Across diverse sites of dialogue and collective action, Sarah encourages us to push past colonial stigmas and stereotypes in order to develop deeper intimacy with one another.

Sarah Hunt is Kwakwaka’wakw, from the Kwagiulth community in Tsaxis (also called Fort Rupert) and is also of Ukrainian and English ancestry. She is assistant professor in First Nations and Indigenous Studies and the Department of Geography at UBC, working and living as a guest in unceded Musqueam territories.